L.A. native Keith Mozee, who began his city career as a truck driver, oversees the largest street network in the nation

Keith Mozee believes in doing his best, regardless of the task, and that mindset paved the way for his journey from truck driver to general manager of StreetsLA, the Los Angeles city department formerly known as the Bureau of Street Services.

“I believe in doing things to the best of my ability – perseverance. Be willing to work harder than the next person. When you see something negative, respond with the positive. Do the right thing,” advocates Mozee, who has found great success by engaging these philosophies.

As executive director of one of L.A.’s most visible agencies, Mozee oversees the largest street network and urban forest in the nation.  In addition, he manages the city services that residents and businesses request on a daily basis such as filling potholes, trimming trees and repairing sidewalks.

Acknowledging the vastness of his duties, Mozee said, “The amount and scope of work is tremendous. StreetsLA is responsible for 23,000 lanes miles of streets, 800 miles of alleys, 700,000 trees in the urban forest and 9,000 miles of sidewalks.”

The agency, which is comprised of 1,100+ employees, also issues permits, directs the city’s sidewalk vending program, and protects the public right of way.  Basically, said Mozee, “We make people’s lives safe through the work that we do and we’re always looking for ways to improve how we work with communities.”

Improving relationships with community members falls in line with his desire to do his best, an attitude he’s demonstrated since joining StreetsLA in 1989 after applying at a job fair held at Audubon Middle School, which happened to be his alma mater. 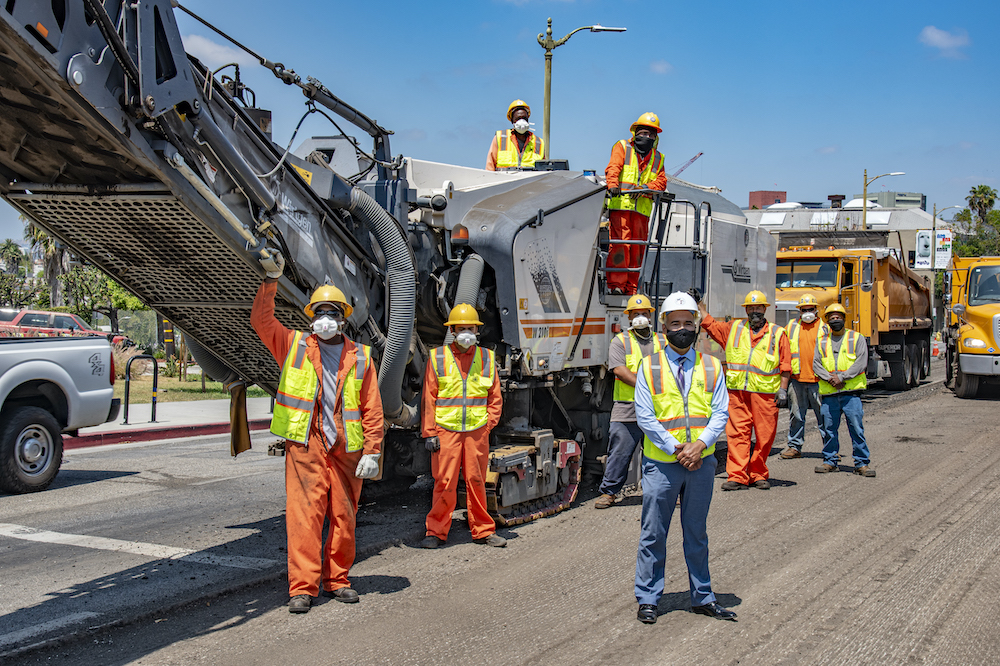 A native of Los Angeles, Mozee grew up in the city’s Leimert Park area.  When he stopped by the job fair, then-Mayor Tom Bradley was there along with representatives of several city departments. So, Mozee applied and was hired as a light truck operator by the bureau.

“Coming up in the bureau, I worked in various positions. I went from truck operator where I filled a lot of potholes, then to paving crews, and then to motor sweeping. In time, I was able to promote and start running crews as a supervisor, superintendent and general superintendent,”  he recalled.

In addition, Mozee enrolled in college, completed several courses in street maintenance technology and earned a Bachelor’s degree in urban studies and planning from CSU – Northridge.  The education boosted his career options and helped him promote to upper level jobs.  In 2016, he was appointed assistant director where he served as StreetsLA’s chief operations officer.

At that point, “doing his best” had catapulted Mozee to oversee the bureau’s Street Renewal,  Engineering, Construction Services and Emergency Operations Divisions.  He also was assigned as the Racial Equity Officer and the COVID-19 Safety Officer.  With such extensive experience, it’s no surprise that Mayor Eric Garcetti nominated him as the StreetsLA general manager and the City Council confirmed Mozee for the job on July 1.

His goals for StreetsLA include approaching infrastructure with a non-traditional viewpoint.  As he explained, “In the future, as we go into neighborhoods and areas, we’re not just going to pave the street. We’re [also] going to fix the sidewalk, prepare an access ramp and plant trees. 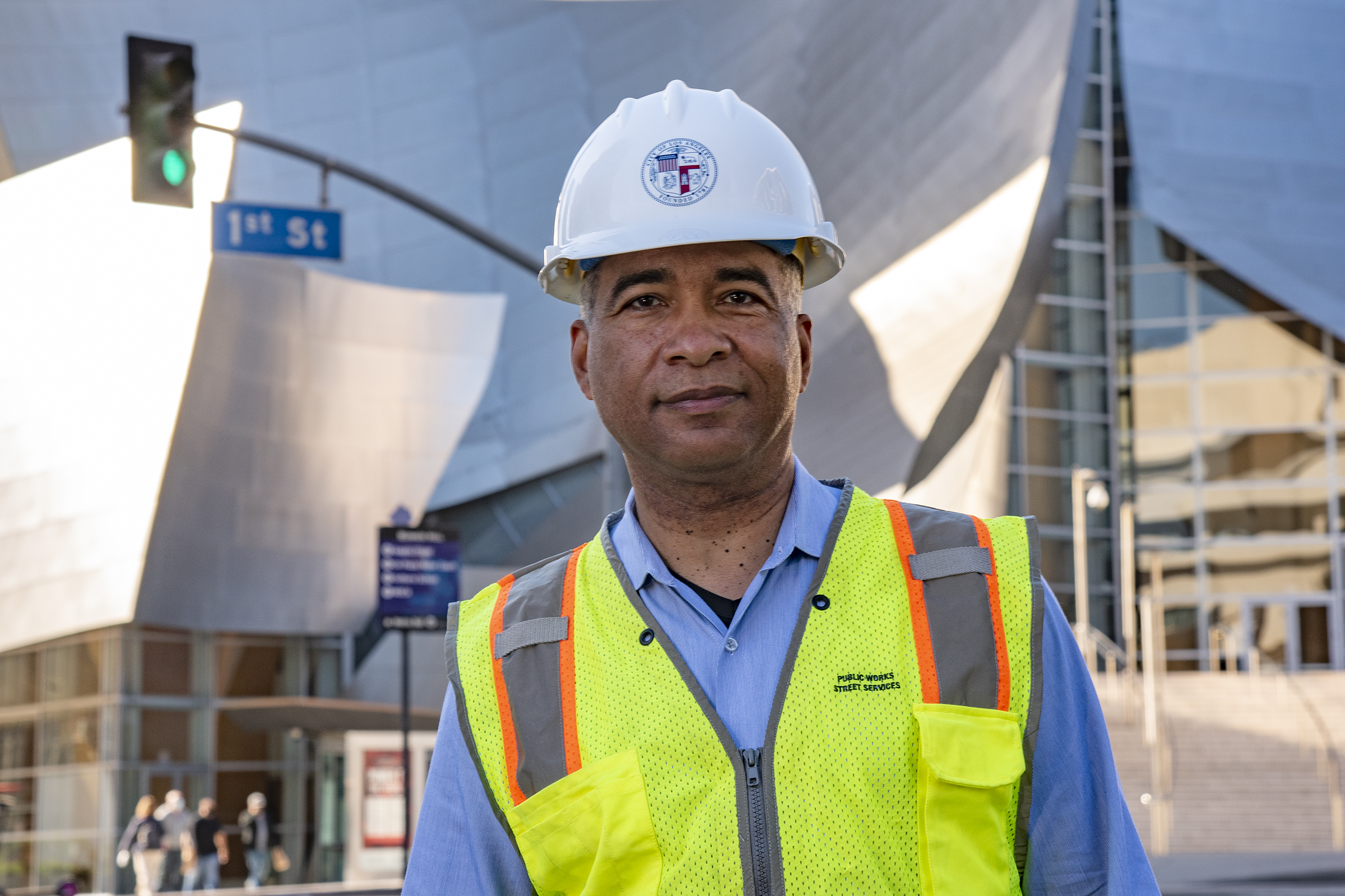 Mozee stands on 1st Street in downtown L.A., where Los Angeles became the first city to resurface a portion of a major street with recycled plastic asphalt. (StreetsLA photo)

“We’ll also look at mobility and bus shelters as part of the sidewalk transportation program and a year or two after that, we will review our sustainability efforts. Perhaps increase our tree planting and look at things like bio-diversity and natural wildlife in areas, which are really important to us to support.”

Workforce development is another area that Mozee will focus on. Employees will receive more information about available educational sessions along with college courses that result in certifications or degrees. Also, with an increasing number of women serving in the field, Mozee hopes it will lead to increased diversity in the management ranks. 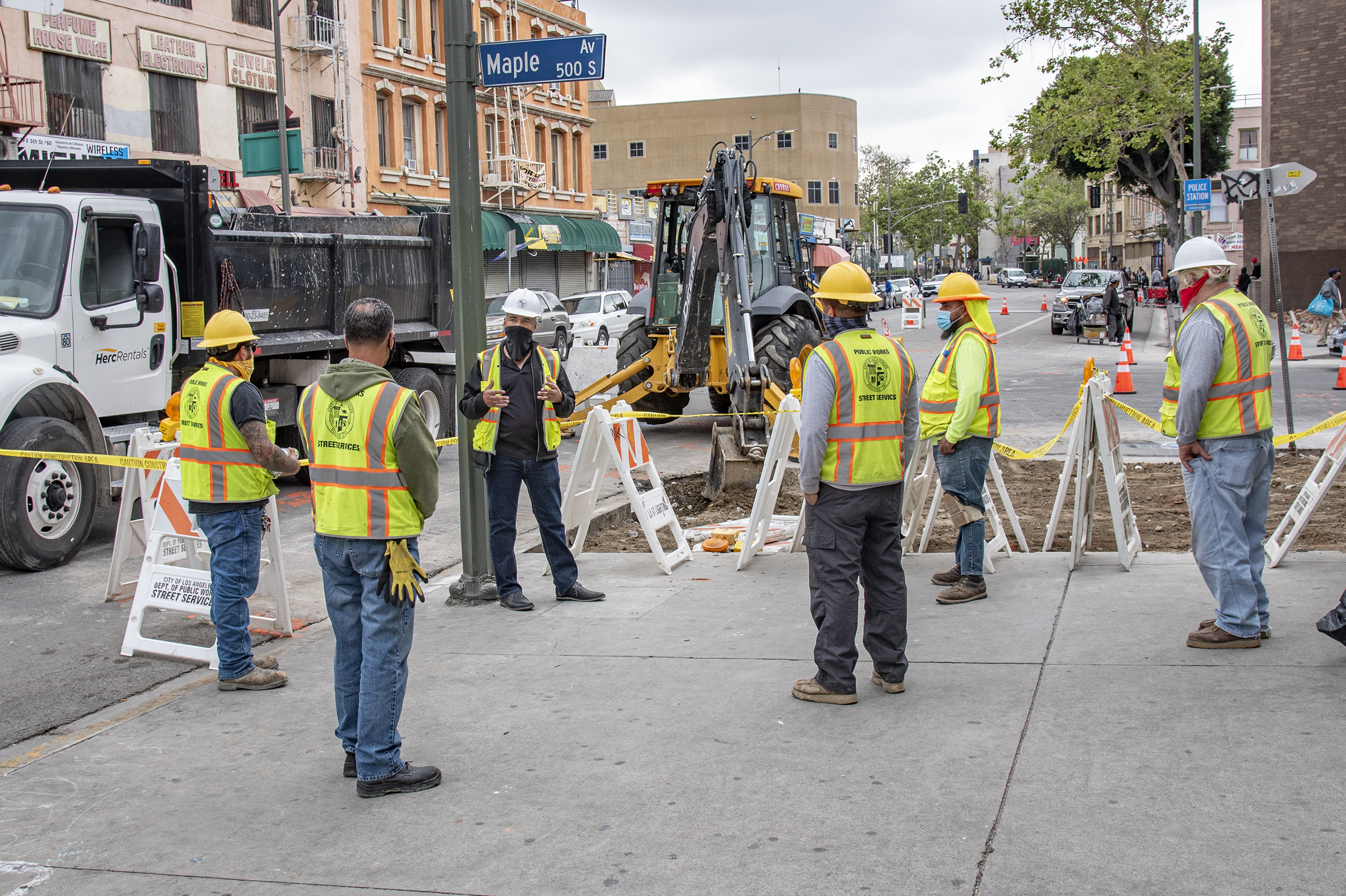 “We have women who are engineers, architects, motor sweeping operators, part of concrete and paving crews, and working on pothole trucks.  Gender equity is very important to us too along with racial equity, making sure that people are treated equally and fairly,” he stressed.

“We want to be transparent about training opportunities, so employees can [take advantage of] upward mobility. We also want to diversify our middle management. Although we are diverse we can do better as far as promoting people of color and women,” noted Mozee, who also serves as an adjunct professor at L.A. Trade-Technical College.

StreetsLA aims to add staff to the bureau as well.  The agency is authorized to have 1,500 employees, so about 400 vacancies currently exist.  The general manager plans to work with Targeted Local Hire, an alternate job pathway into city civil service jobs that recruits individuals from the vulnerable and underserved populations, and utilize other employment strategies to expand the workforce. One advantage of working at StreetsLA is that many entry-level positions only require a high school diploma.

“You don’t need a college degree to start at StreetsLA, except for positions like an engineer or architect. When I started, I didn’t have a degree. I started in the labor force and worked up through management by obtaining my degree,” said the executive director, who added that some courses qualify for tuition reimbursement based on an employee’s union affiliation. 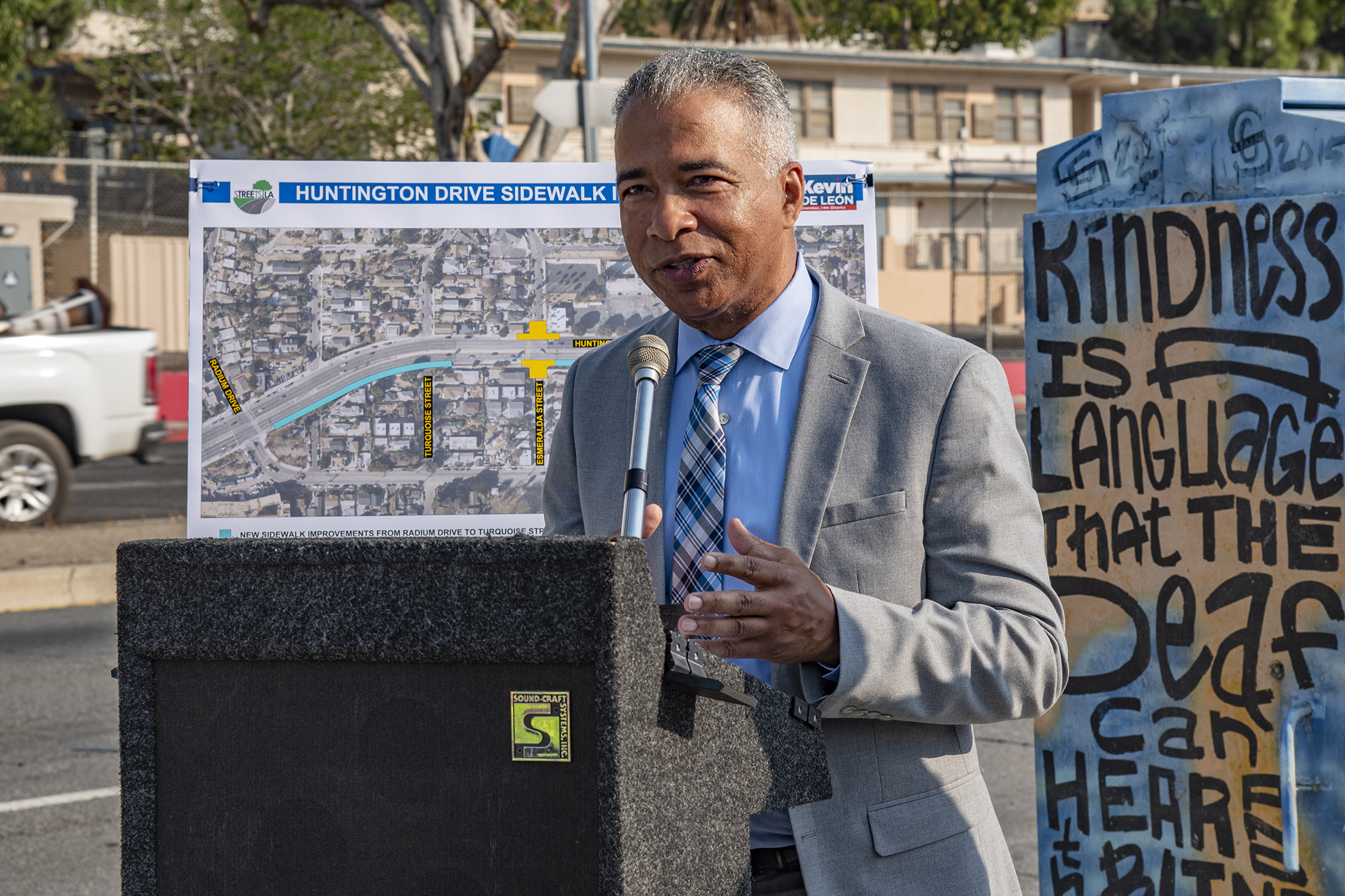 Other concerns will likely arise during Mozee’s tenure, but whatever the issue, putting forth his “best” to his staff and community members will be a guiding factor as he moves forward. In fact, Mozee invites the public to communicate with StreetsLA to help the agency “give its best to your neighborhood.”

“We believe in meeting with different stakeholders like neighborhood councils and block clubs. Reach out [to us]. Tell us what you need and the services that you want in your neighborhood.”

To learn more, visit streetsla.org or call 311 for a service request. 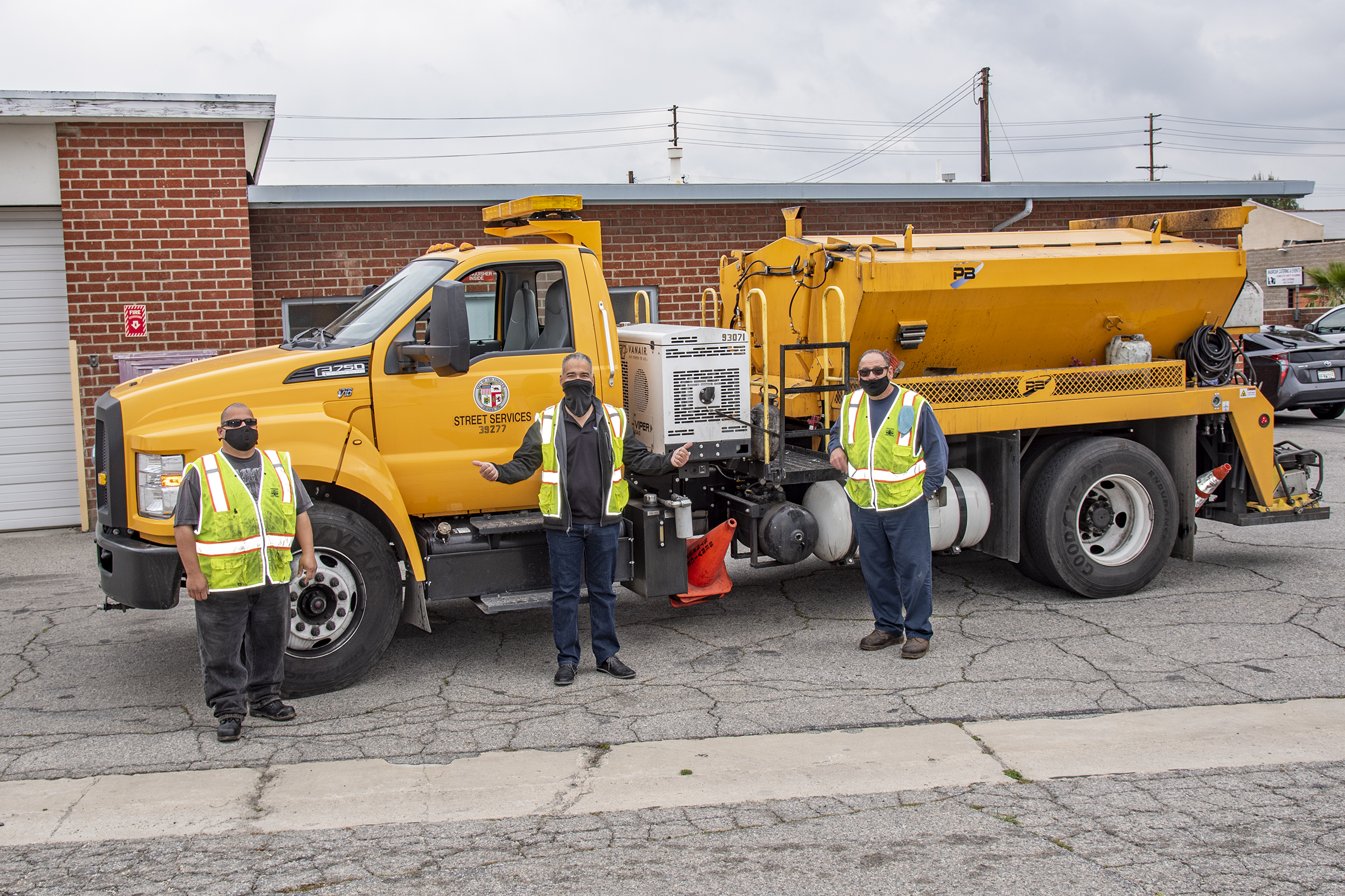 Mozee has come to know many staff during his long city career. (StreetsLA photo)